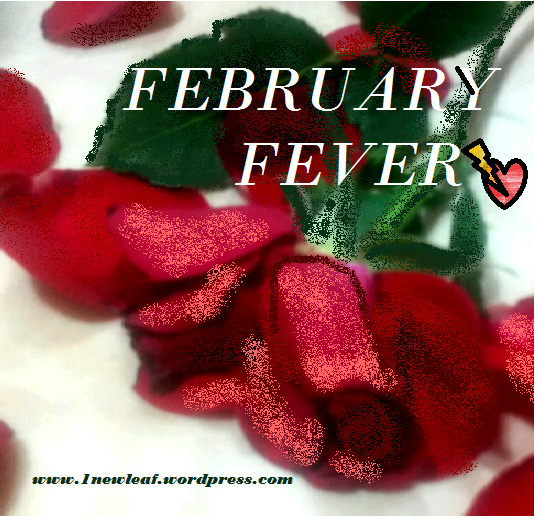 On Sunday Feb 15th, Farha was sitting alone on her hostel bed with a diary on her hand. She was reading her diary with whom she shared things she wouldn’t say  to anyone else.

Feb 1: Dear Diary, It would be my first Valentine’s day in the college. Girls are buzzing about it. Now is the time to shine.  I hope I’m popular too. I guess – there is no fun in the college without some attention.

Feb 2: OMG. Some of the girls made most of the week end – did shopping and went parlour.  They look so special. Beep beep –  I’m lagging.   Next year I’ll be prepared.

Feb 5: Pretty Rehana confines her fears to me.  She is scared no boy would give her a card or a rose. She scares me of, what will happen of me?

Feb 7: Week end – Postponed my trip to home. Now I can shop high heels, fancy mobile accessories and other cool stuff with friends.

Feb 8: LOL. What has Rehana done to her hair?!! Is it a Rainbow or did she get stuck by a lightning. If I was a boy I would run away from her. My heels and accessories are in no match to other’s attires. Do they book these dresses before actresses even try them on?

Feb 10: I should have seen the beauty contest coming – will it be Sara or Rashma who would get maximum roses?  Hope at least some sweetie spares me a card.

Feb 12: Caught by seniors – Such a waste of time; Hours spent wrapping gifts for their valentine! Gifts for their mom dad uncle and aunts too! Why? May be they hope this will make their parents overlook the expenditure on their BF. Or, is it mere guilt?

Feb 13: All my roommates are sending friendly messages to boys on WhatsApp!  The boys were first to attract them with jokes and other silky messages. I would never give my number to any boy. Too shy for that!

Feb 14: SOS SOS… The day is her -CAN’T decide what to wear. Every colour dress has a meaning.   Traffic signs are so much easier to remember. I hope what I select gives no special signal. Rehana in Green! – Is she that desperate? Even rose colour means something! I just don’t want red – don’t wish to break anyone’s heart.

Farah’s face is red and swollen. Few hours of tears would make any one red. She picks up her pen and writes, “Who knew Rehana would win the contest? Roses of different colour- more vibrant than her hair adore her table now . She has pasted all her heart shaped cards on her closet. The teddy bears look cute on her bed. Dear Diary, Anyone can easily count all the stuff I got – Zero. Am I not pretty or friendly? Then why am I not a part of group lunch parties my friends are in even on Sunday? These girls didn’t even bother to say me a bye. So we are back again as best friends my ever reliable diary! You shall always remain my best friend. Well, my only friend.” Farha drops her pen down and starts crying again. 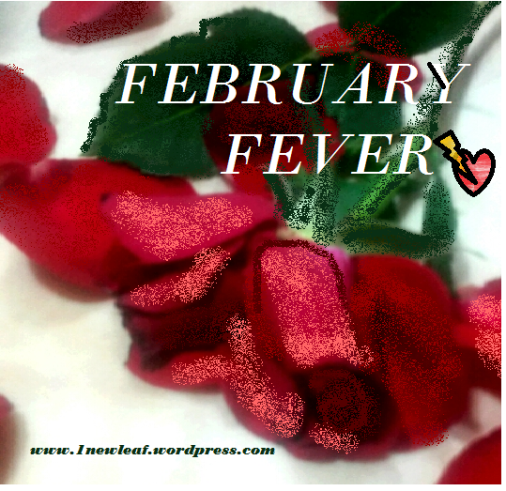 She hears her name being called. “Farha, Farha, where are you?” Before she could rise up her lecturer Dr. Yasmin enters into the room. “Yah Allah. Did a bee sting your face? What have you made of yourself? You just missed a call from your parents. Weren’t you lost in your thoughts to hear the announcement?  I guess your mobile is silent too.“ Farha quickly closes her diary and wipes her tears. Too late, it was as though Dr. Yasmin could see through her.  The strict lecturer was standing next to her inspecting her room. There were valentines gifts all around except in her place. Next to her was her gaudy diary and on the  floor was a shoe box with untouched flashy heels.

“Are those shoes comfortable for you? Wear something else I am going to a book store and could use an extra hand.”, announced her lecturer. “Please wash your face and call your parents before joining me in the hostel lobby. Hurry up.” Few minutes later unwillingly she was walking along with her lecturer. They hardly spoke. Campus was big and green. Fresh clean air, chirping birds and green trees could make anyone forget their worries. Farha wondered why she hadn’t noticed the beauty in her campus earlier. Of course,  the chit chat with the girls was the reason.

Now they were in a bus to the closest town. The bus was almost empty. Few minutes later Dr. Yasmeen spoke. “Are you feeling better now?” Farha nods. Dr. Yasmeen continues, “I just want you to know. It’s natural to be attracted to opposite sex.  But we humans can control our desires. “ Farha hears herself utter, “ No madam, I am not interested in anyone. I didn’t want to be left behind. Now girls are showing cold shoulder just because I didn’t get any attention. “Dr. Yasmeen asks bluntly, “Pier pressure! ? And what kind of attention were you expecting? Friendship?  What would it have led to? You are not different from those who are partying now. Had you got opportunity you would have done exactly the same and avoided those who stayed behind.” It dawned on Farha it was true.

Seeing Farha silent Dr. Yasmin questions softly, “why are you studying medicine?” Farha chooses her words carefully this time. “It’s a noble profession. I could serve humanity.” Dr. Yasmin smiles as she replies, “Excellent – I don’t see boys or even your friends in your reply. See, all this is a mere distraction and your future is better off without such “attention”.”

Dr.Yasmin continues few minutes later, “Dear Farha, I may not judge you but you will be ultimately judged by ALLAH. He is always watching you. It’s His mercy that you are not amidst those partying today. There is bigger purpose in being here – To please Him. With right intention your medical degree can help you gain high levels of paradise.

A muslim cannot celebrate valentine’s day. This is because

1-     It is an innovated festival for which there is no basis in Islam.

2-     It promotes love and infatuation.

3-     It calls for hearts to be preoccupied with foolish matters that are contrary to the way of the righteous. Like being showy ,extravagant.

You have full control over what you write in your diary, but you cannot control the two angels Kiramen Katibeen (“honourable scribes” ) who are busy writing your good and bad deeds on your right and left shoulder. Which book should have been heavier in past two weeks? Sweety, you may be just a teenager as per you.  Still you are old enough to be questioned for your actions. Remember one of the questions on the day of reckoning would be – how did you spend your youth? “

Seeing Farha’s pale face, Dr. Yasmin opens her hand bag and takes out a book .  “I note hadiths and verses I like in this. “ Then she qouotes,

“It was narrated from Anas that the Messenger of Allah (ﷺ) said:

‘Every son of Adam commits sin, and the best of those who commit sin are those who repent.’ – Ibn Majah

Allah’s Messenger (ﷺ) said, ‘Allah is more pleased with the repentance of His slave than anyone of you is pleased with finding his camel which he had lost in the desert. ‘ 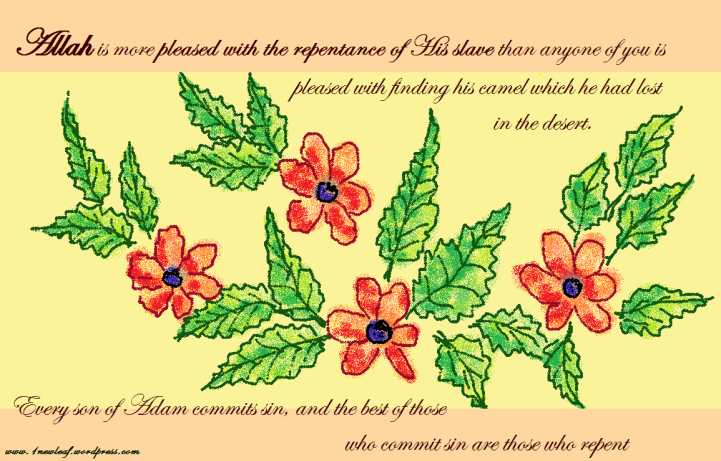 Farha, Allah’s mercy is vast- Pray for guidance and forgiveness of your friends too. “

They had now arrived at their destination. Farha had a milk shake as her lecturer collected her books. Almost immediately they caught the return bus to college.

Seeing Farha now at ease, Dr. Yasmin speaks again, “There is a prewritten diary which you would love to befriend.  It speaks back to you too. There is nothing there to be hidden and it solves all your problems. Can you guess what is it?” With a big smile Farha answers, “Quran.” Proud lecturer says, “Bulls eye. And here is a translation of quran for you.” Farha was touched. She replied, “Thank you madam. You are very considerate.” Dr Yasmin, “Alhamdhulilah. Could you please read translation of verse 35 from  surah Al ahzab (chapter 33)?” Farha reads, 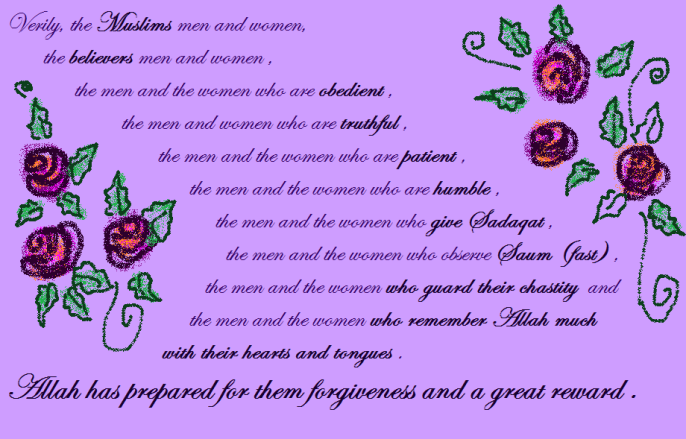 Dr Yasmine says, “I guess it explains what you need to do  from now on. Read first 10 lines of surah Mumeenun when you are free. Do you know Ameena stayed back too? She has no regrets regarding this. She could make a good friend and have positive influence. Don’t be a leaf in wind, following the trend. Make Quran your anchor.”

On returning Farha was seeing things with different perspective. Proof of it was in Farha’s diary.

Feb 16th: Yesterday was the best day of my life. Thank you Allah – for a day with Dr. Yasmine. It was silly to listen to the girls. Each wanted to show they had better time than the other.

Feb 20th: Ameena is such a sweety – always wakes me for fajr salah. She has agreed to come along with me to exchange those heels for something more comfortable. Bless her Allah. . And yes, Allah only You can save Rehana from becoming bald. She is trying everything to remove colour from her hair prior to her parent’s visit. Give her some sense. If getting caught could help her live sensible life – let her get caught with coloured hair.

Feb 28th: Alhamdhulilah, I see it now. Praying for others purifies my heart and removes my ill feelings  for them. Best remedy for me. The whole valentine attack – is like a viral fever.

Symptoms: initially -Self pampering and spending, later – depression boasting and regret. Attack may get worst annually. Only remedy – To adhere to His commands. It’s now time to be with my best friend – Allah’s Quran. Bye diary.

Prevention is better than Cure – Don’t forget to take your daily dose of Quran Booster to strengthen your iman.

Raw hues and splitting seasons; all things constant and floating ~